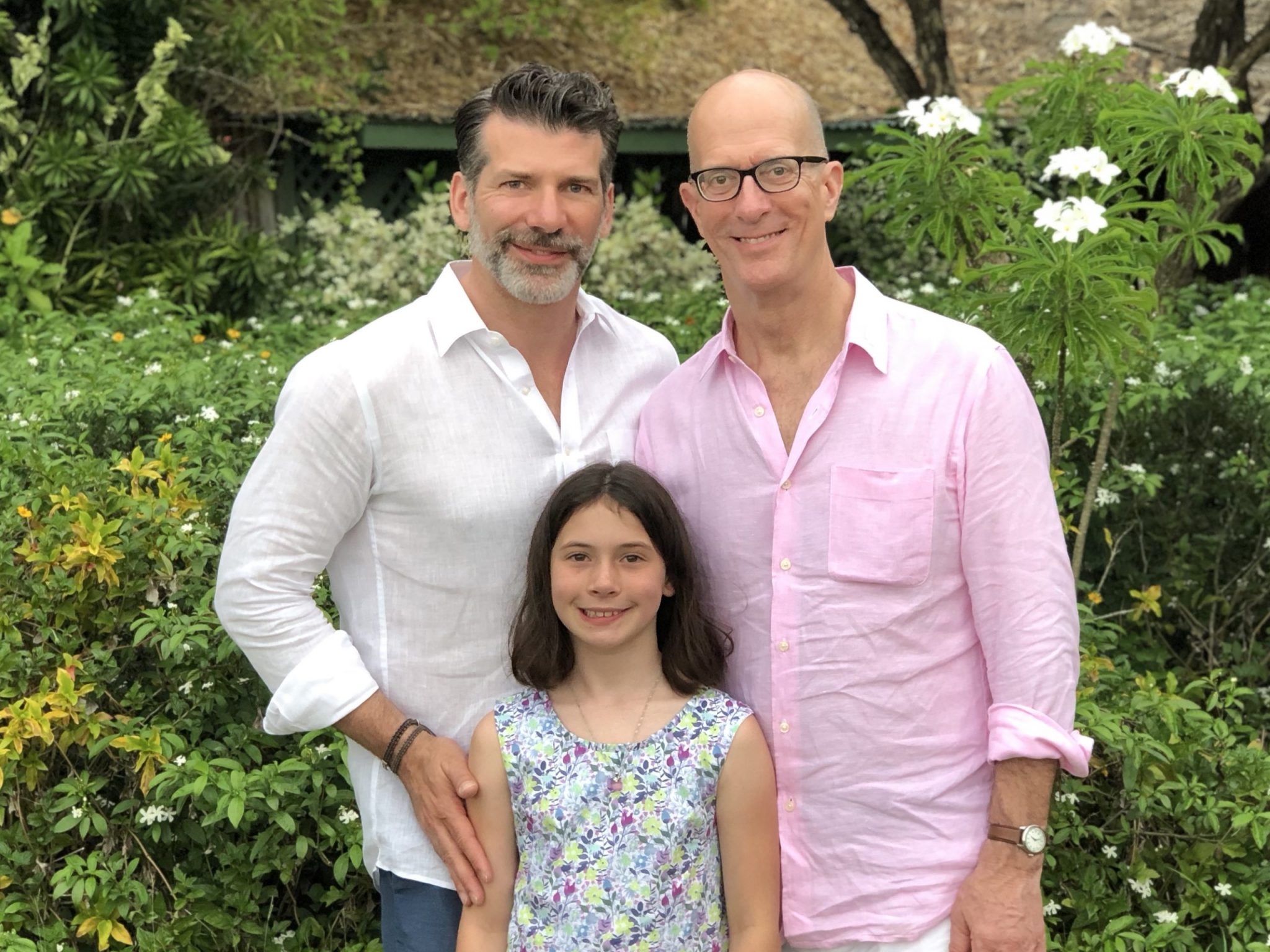 This week we’re happy to be featuring two dads for our “Meet a Dad” story! Douglas Graneto, principal of Douglas Graneto Design and his husband Wear Culvahouse, a retired OB/GYN who is now COO of the company, live in Greenwich, CT with their 11-year-old daughter Katie. We spoke with them about their family life, path to fatherhood and advice to gay young people who might be struggling.

Can you please tell me a little bit about your backgrounds and family life?
Wear: I grew up in rural Tennessee in a county that even now only has 9500 residents. I didn’t even know the term homosexual, or even that homosexuality existed, until I was in graduate school. At that point I happen to read a novel by Patricia Warren called The Front Runner, which dealt with a gay track and field athlete in college. I was a high school miler so the book blew my mind, and I wept openly understanding who I was and what laid before me.  Before then, my fraternity brothers at the University of Tennessee  would talk about women’s breasts, but I didn’t get it. Only when I read the book did I understand my orientation and it all made sense.

I came to Greenwich in 1986 from Georgetown, where I had just finished my OB/GYN residency. At the time my closeted gay friends were confused as to why I would move to Greenwich, when I had other job offers in metropolitan cities. My only goal, at that point in my life, was to try and be openly gay. I didn’t know an adult that was out, but I knew I couldn’t live being closeted.  The risks of failing and losing a job were so great that I felt I needed to move as far away as possible from Tennessee, since I wanted to protect my large, extended family from an embarrassing misstep.

I grew up in a home where education was a priority. I have four siblings, all who are professionals—my brother is the Ambassador to Australia, my older sister obtained her MBA from Vanderbilt and my younger sister became an account executive at several banks in Richmond, VA.

Douglas: I grew up in Portland, Oregon, and while I couldn’t wait to leave Portland, I now find it to be a wonderful place to visit my parents and brother. Like Wear, I moved as far away as possible—to Miami! After three years I received a job offer in NYC to work with Tony Ingrao, an interior designer that I respected. I arrived in NYC in 97’. I worked with Tony for eight years, and it was an amazing experience. From him, I learned the necessary details for interior designing, where layering is the key to making a house a home. Through Tony and a client, who happened to be a neighbor of Wear’s, we were introduced.

When did you first realize that you wanted to be a dad—and did you ever fear that it wasn’t going to happen, as a gay man?
Douglas: I always knew that I wanted to be a dad, but in college I didn’t think it was possible. Once I moved to NYC, I spent some time in a relationship that made it clear to me that this was my goal. So when I ended that relationship I made sure that the next man I would love, would want children.

Wear: Ha—I had totally closed the door on children. There are several years’ difference in our ages, so the only goal I had was to live as an openly gay man. So when I was introduced to Douglas, I had to think hard and fast, because on our second date, Douglas told me that if I didn’t want children, he didn’t think the relationship should go further. I told him that I needed time to think about it. One day I called him and told him five would be a good number. He was stunned when he realized I meant five children!

Ha, that’s too funny. Can you please share the process by which you became dads?
Douglas: We had a civil ceremony in 2004. After that we spent three years trying to find a surrogate in CT, since Wear wanted the baby to be delivered at Greenwich Hospital, where he worked and was supported by the nurses and doctors in L&D. Although we came very close to finding a surrogate, each time we thought we had sealed the deal, at the last minute the surrogate chose a heterosexual couple. So after those emotional up and downs, we reached out to a surrogacy group in San Diego who specialized in surrogates for same sex couples. We were immediately matched with a wonderful woman who lived outside of San Diego, so while we wouldn’t deliver at Greenwich Hospital, we would become parents.

Wear: Because I worked at Greenwich Hospital as an OB/GYN, and because I had already delivered thousands of babies, many of my patients and friends threw a baby shower with the theme “Who’s Your Daddy?”.  We had inserted two embryos but only one had taken! That celebration was full of support, love, laughter and joy. Both Douglas and I were a bit fearful of letting friends and family know about the upcoming birth, but it took only one revelation to a very close friend for the celebrations to begin.

Wear: One of the unique experiences for gays to become Dads is that you look through a virtual book of young women who are willing to donate their eggs. And that was a challenge, for how do you choose from all the many options that are available? We finally decided to look through the book separately and each choose 15. Surprisingly, of our 15 we had five that overlapped. So over the next several days we discussed the pros and cons of these five donor options, as well as talked in great depth about our own families genetic histories so that we would not increase the chance of alcoholism, cancer, etc. in our child to be.

What was your experience like delivering?
Wear: I had been the OB for several same sex couples at Greenwich Hospital, which was on the forefront for this movement. Part of that was because NY and NY prohibited surrogacy, so same sex couples from those states came to Greenwich to deliver. I was a party to the behind the scenes discussion within the hospital on how best to treat the surrogacy and the same sex couple. So I knew a great deal in regards to the questions I needed to post to the various hospitals near where our surrogate lived, such as will a room be provided for us to sleep, what the beliefs of the L&D staff were on surrogacy, if we had a boy, who would do the circumcision, would food be available for us if the delivery went after hours, which pediatrician would welcome us, etc. But the one thing that I didn’t think to ask was whether the hospital had a nursery. As anyone who lives within the Greenwich radius knows, at Greenwich Hospital you can either room in with your baby, or you can have the nursery staff take the baby at night in case the mother wants to catch up on lost sleep or recovery from an arduous delivery. But in CA many hospitals did not have a nursery. Either you roomed in with your baby or the baby was in NICU for a medical problem. So after the delivery Douglas and I walked to a local restaurant as the hospital cafeteria was closed. We toasted our good fortune to have a healthy baby girl. By the time we returned from dinner, the L&D staff had determined that we were unfit parents, since we had “disappeared” and they had been taking care of the baby during our two-hour dinner. The atmosphere could have been cut with a knife. The night staff was essentially not helpful for the rest of their shift. It wasn’t until the morning shift arrived that we were treated professionally. 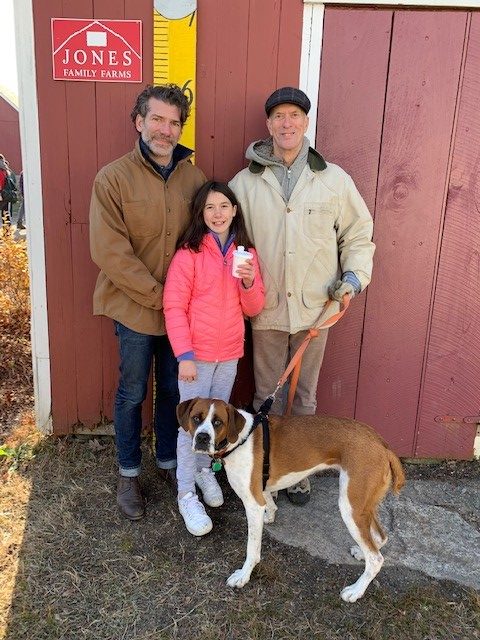 For sure—parenthood is a great way to become instantly more involved. Have you faced discrimination as gay dads—or has Katie experienced any issues with friends, etc.?
Wear: No, not really. We did experience one family who was clearly not happy that Katie was in school with their kids, but the other 99.9% of the time, we have not.

Douglas: One of the things we knew from others who preceded us was that we needed to give Katie “talking points” on how to answer questions from her classmates as to why she didn’t have mom. Fortunately, we have talked and had visits from our surrogate, so Katie knew her story well before it was asked of her. As an aside, when Katie’s surrogate married a few years after Katie’s birth, Katie was in the wedding!

Also, although we gave Katie her talking points, we didn’t think that her classmates would ever ask US why Katie has two dads, ha! I was having lunch with some of her friends, when one asked me why Katie did not have a mom. He said with great conviction that only mommies could have babies, so how was it that Katie had two Dads and no mother? Looking back on it, I realized I really stumbled through an answer, but I did have the wherewithal to tell Katie’s teacher that if there was talk on the subject of biology and surrogacy in the classroom she should be prepared!

It’s Pride Month. What would you say to young people who might be struggling?
Douglas: Maybe it is cliché to say, but the suicide campaign “Its gets better” is true. It is hard for any child to realize that they are different from their peers, but it is especially hard to tell friends and family that you are gay or lesbian or transgender. I know that the advice that is given is to talk with an adult, but I found it was easier to confide in a close friend. I found that they supported me more fully than family.

Wear: During my 25 years of practicing OB, I had many patients come in to talk about their concerns that their son or daughter was gay and did I have any advice on how to approach it with them. I always gave the patient my cell number, and told them to tell their child that I was available if they wanted a gay adult to talk to, but no one ever called. So I agree with Douglas. It may be that the risk of  telling one’s parents feels greater than the risk of sharing the news with a close friend.

How much progress has been made in terms of adoption/surrogate options for gay parents since you became parents?
Wear: In 2009, when Katie was born, less than three states allowed surrogacy with pre-birth orders, meaning both Douglas and I could be on the birth certificate. Neither of us had to adopt her. Now there are 13 states that allow this to happen. And while this is great progress, there are ten states where surrogacy is either prohibited or surrogacy contracts or void or unenforceable. In those states you can be jailed, fined or be forced into sharing your child with the surrogate.

You and Douglas have busy jobs. How do you balance fatherhood with work?
Douglas: It is actually no different than what a traditional family goes through. It is the eternal struggle that all parents deal with—balancing home life and work.